A cheese board can be an easy and impressive entertaining option for parties, but intimidating if you’re new to the game. To smooth the path to success, we got the lowdown on party dos (and don’ts!) from our own super-savvy specialty food expert, Ken Blanchette.

END_OF_DOCUMENT_TOKEN_TO_BE_REPLACED

Eggnog. It’s a “love it or hate it” thing, but I’m squarely on the side of the “love it” crowd. This is probably bad for my goal of zero holiday weight gain, but I’m sure it’s 100% good for my holiday spirits.

If you’re a lover like me, I’ll let you in on a secret: eggnog isn’t for sissies. This drink’s silky-sweet combination of egg yolks, cream, sugar and nutmeg (preferably with a jaunty shot of dark spirits) hides a long run of fame and notoriety. Eggnog is the scandalous rock star of the holiday treats world….

END_OF_DOCUMENT_TOKEN_TO_BE_REPLACED

When winter is dragging on and your go-to mug of hot chocolate starts looking a bit ho-hum, it’s time to start adding creativity to your cup (and we’re not just talking marshmallows or whipped cream).

Cocoa goes well with a variety of flavors, so it’s fun to experiment. Armed with a wide array of add-ins and toppings, you can make a new flavor combination for every day of the week.

Here are ten fun ideas to get you rolling:

END_OF_DOCUMENT_TOKEN_TO_BE_REPLACED 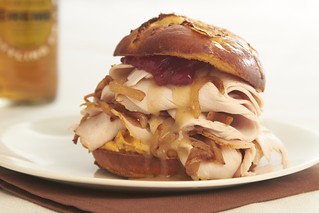 Having just launched the new FreshDirect Sandwich Shop, Chef Tina Bourbeau chats with us about eating her way through Philadelphia’s legendary sandwich shops, developing the FreshDirect line and what it takes to go from a good sandwich to a great sandwich….

END_OF_DOCUMENT_TOKEN_TO_BE_REPLACED

When you have to eat right but you can’t resist the pull of nostalgic foods that don’t generally make the “healthy foods” list, go for lighter versions of the classics.

The editors at Everyday Food magazine have a few great tips for how to substitute some ingredients, cut back on a few others and still come out with a delicious result that’s sure to please the whole family.

Read on for cooking tips and recipes to help lighten everything from entrées to dessert….

END_OF_DOCUMENT_TOKEN_TO_BE_REPLACED

Sure, it takes a little more effort to make your own holiday cookies, but those who take the time to bake their own are rewarded with a warm kitchen, an assortment of irresistible scents, and batches of homemade treats that are perfect for giving as host gifts, swapping in cookie exchanges or offering as treats for holiday guests.

The baking pros at Martha Stewart’s Everyday Food magazine have assembled a group of holiday baking tips and tricks to help make sure your cookie creation is fast, foolproof and fuss-free.

Read on to learn more:…

END_OF_DOCUMENT_TOKEN_TO_BE_REPLACED

Thanksgiving is just a few days away, so there’s no better time to pick up a few last-minute ideas to make the preparation easy for the feast of Thanksgiving sides, desserts and drinks.

Today, the experts at Everyday Food magazine offer a bounty of helpful tips for “everything but the bird.”

END_OF_DOCUMENT_TOKEN_TO_BE_REPLACED

The countdown to Thanksgiving is underway. Are you ready to tackle the turkey, submit the stuffing and declare victory over the hors d’ouvres?

With so many guests and different seasonal dishes (and just one oven), this is a holiday that causes pre-show jitters even for veteran cooks. But a little preparation in advance can help you identify issues now and lay the groundwork for a flawless feast.

Read on for a collection of turkey tips from the pros at Martha Stewart’s Everyday Food Magazine to help you get through the big meal in style….

END_OF_DOCUMENT_TOKEN_TO_BE_REPLACED

At this country’s first Thanksgiving, the pilgrims were eating a very different turkey from the holiday bird that sits on modern Thanksgiving tables.

According to rancher Bill Niman, the great majority of turkeys grown in the US are the “Broad-Breasted White” breed, a bird that’s grown for… you guessed it: broad breasts.

On Niman’s ranch, his small staff is raising heritage-breed birds that are a lot closer to the turkeys our nation’s founders would have recognized.

Bill Niman is the rancher that The New York Times called a “pioneer of the ‘good meat’ movement,” and he took some time to chat with us about his BN Ranch Heritage-Breed Turkeys, which FreshDirect is selling this holiday season….

END_OF_DOCUMENT_TOKEN_TO_BE_REPLACED

Bake a batch of bats and cats

But there’s no need to fear… you’ll be prepared for fiendish festivities and hungry hordes with a few great tricks (and treats!) from the team at Everyday Food magazine….