Crisp air. Yellow and orange fallen leaves. Soft knit scarves. Pumpkin!  Between pumpkin lattes and pumpkin pie, the fall season has become synonymous with that gorgeous round squash. Armed with a fat, orange pumpkin or a big can of Libby’s, you can add pumpkin flare to almost anything.

Pumpkins are so versatile, you could break down pumpkin-y delights by category when looking for inspiration: there’s everything from soup, pasta, breads and muffins, dessert (including pie, of course), beer—even pumpkin dog treats.

With so many options, I decided to narrow it down and experiment with easy pumpkin breakfast ideas, reusing the same basic ingredients for three different recipes. If there’s a good time to add nutritious and filling pumpkin to your meal, it’s probably first thing in the morning!

Each recipe is pretty flexible so feel free to experiment on your end—swap almond milk in for my skim milk or add an extra scoop of pumpkin here and a dash of cinnamon there. 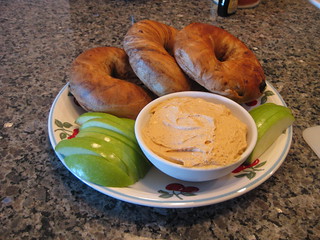 Combine all ingredients until smooth. (Use a mixer if you have one—I just used a wooden spoon.) Refrigerate overnight for firm texture. Spread on cinnamon raisin bagels or use as a dip for sliced apples and grapes. 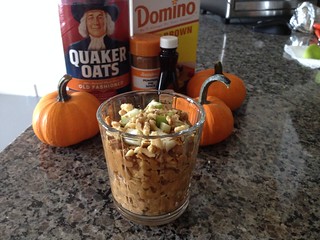 Combine all of the ingredients (minus toppings) in a microwave-safe bowl. Heat until oatmeal is cooked through (about 3-4 minutes depending on the microwave). Add chopped apple and walnuts to taste. Yum! 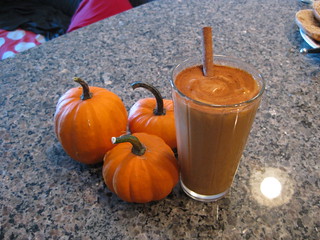 Toss in the ingredients and mix it up in the blender! It’s hard to mess up a smoothie, especially one with great ingredients. If you want it thicker, use whole milk or add more pumpkin. Instead of brown sugar, you could use honey or agave. I just use what I have on hand and taste after I mix it up in the blender. “Hm, needs more milk.” Be prepared to experiment—that’s the fun. As for this smoothie, I recommend chilling the banana and pumpkin so it’s nice and cold post-blend. I made lots of extras so I had pumpkin smoothies for breakfast—it held up really well over a few days.

What is your favorite pumpkin-based recipe? Let us know on the FreshDirect Facebook page or via Twitter (@FreshDirect).